Data Breach, Web based Attack, Malicious Code have taken down many enterprises across the globe in the year 2013. Symantec has found and analyzed 14 types of threat trends that made every victim organizations to think over them. Here, in this piece of information, we present the findings of 2014 security report powered by Symantec. All attacks were performed on a network and detected by intrusion detection system and firewall. Other malicious actions include phishing, malicious code, spam zombies, Botnet, and attack origins. Below are categories of malicious activities and their analysis done by Symantec. 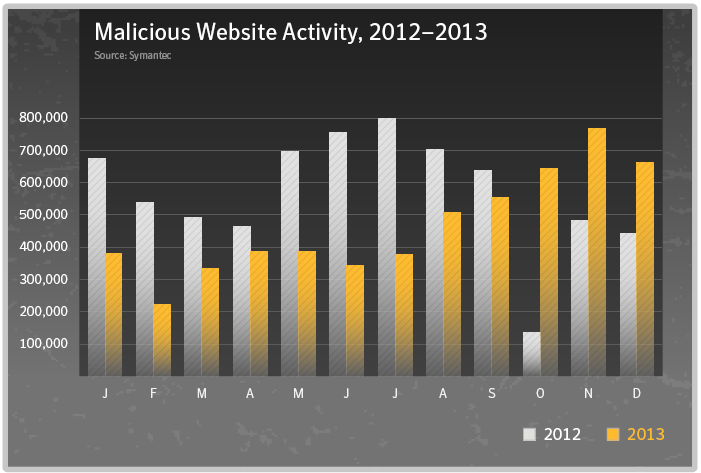 A compromised website plays an important role in deploying Spyware and Adware code. Adware vendors spread potentially unwanted programs like add-in toolbars, and they are rewarded for malicious installation. However, it might happen that sometimes vendors do not aware about usage of their code to be installed. When such installation is done without the end user permission, then it violates the end user’s agreements. 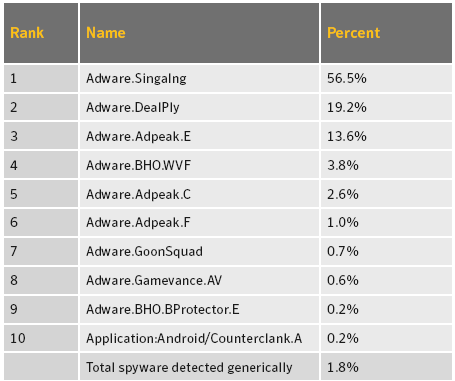 Organizations keep control policy to mitigate potential risk of uncontrolled web server. In 2013, many website categories found malicious. The top most websites were of related to Technology with 9.9%, while the subsequent websites were of Business, Hosting, and Blogging categories.

To control the targeted users remotely, Bots are the great source for it. A single reliable channel in Botnet can compromise large number of computers. Attackers can use bots in DDoS attack, phishing activity, spam distribution, spyware and adware distribution.

The average bandwidth of DDoS attack increased up to three times compare to 2012.

Network Time Protocol (NTP) reflection attacks saw an increase in the last year. NTP is used to synchronize the time between computers on the internet but if it is not updated, then attackers can use it for DDoS attack. In NTP reflection attack, an attacker sends a small packet of data to an NTP server, which then sends a large volume of data to the targeted IP address.

Hackers now prefer network of compromised servers rather than to go for Botnet of compromised computers. Many DDoS services are available from $5 to $1000 relying on the length and scale of the attack.

Mobile threats are evolving day by day; Symantec has discovered top primary threats like information theft, user tracking, traditional threats, sending content, and change settings. Symantec found 132 vulnerabilities in mobile OS in 2013 compare to 416 in 2012 and 315 in the year of 2011. It shows a 68% decrease in mobile vulnerability.

There were 97% of threats found on Android OS, while the other OS like Symbian (with 2%), Windows (with 2%), and IOS (with 2%) were on the subsequent positions. 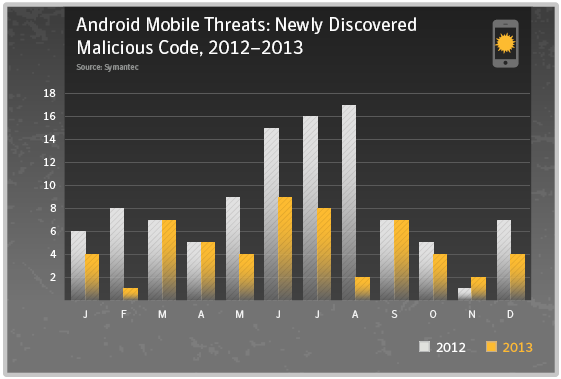 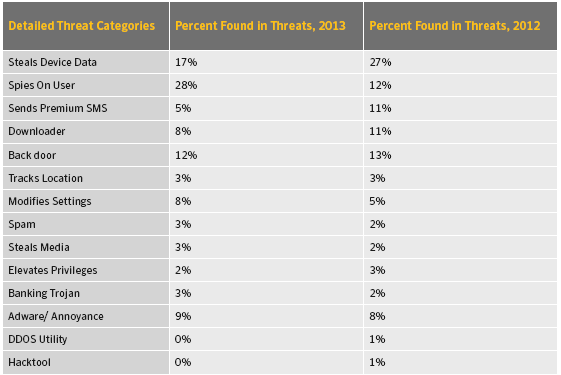 The ongoing task in cyber world called Quantified Self, which collects and analyzes data about a person’s activities and status. If we compare the data of QS recorded in 2013 is 165% higher than the previous 2012 years. The types of data generated with QS applications are:

Businesses involve in QS track every activity of a single person, and collect bunch of data with or without user’s consent. The person installs the app, sign up, and approve the app to collect the data about it.

Identity theft is a serious and growing concern for many organizations. If we look at 2013 identity theft, it saw eight data breaches that exposed more than 10 million identities. In 2013, the overall number of identity exposed has reached to 2,181,891 from 604,826 in 2012. 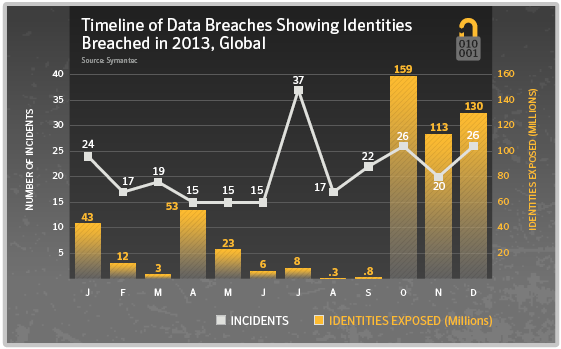 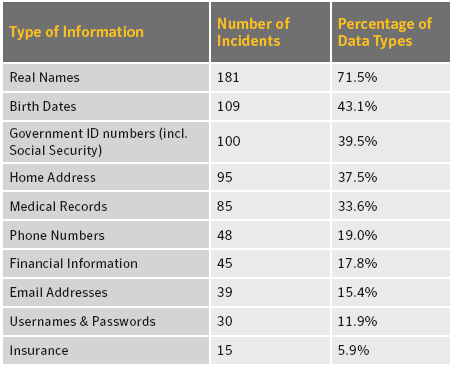 In 2013, 28% number of data breach incidents happened due to accidently publicized records, and it was the second biggest cause for data breach.

In insider threat, insiders like employees are aware about login credentials that are why it is a serious concern for every organization. Employees have in-depth knowledge about the inner working system of an organization that can cause insider threat easily.

There are 51% employees believe that their companies are not strict about transfer of official data into their personal computer. These companies lack strict data security policy, and may become victim of insider threat.

In 2013, attackers used “NTP Amplification DDoS attack” during a holiday season in USA, and took down popular online games.

Experts also believed that online games have bunch of vulnerabilities, and it could cause compromise of gaming server.

The evolution of new black market opened the doors for illegal goods and drugs like the old underground market named Silk Road that adopts the legitimate ecommerce market place and incorporate their features. Such websites use TOR network that provides anonymous internet access to users. Most of transactions are executed in virtual currency like Bitcoin.

The new black market also resembles the online video and music piracy. In October 2013, FBI arrested a man who run such websites and $28 million Bitcoin were detained from this person. Law enforcement agencies need to prevent online narcotics completely. After the move of FBI, attackers moved to copycat services like Black Market Reloaded and Sheep.

New black market does not stand for security threat, but provide additional income for cyber crime gangs and a platform for fraud.

TOR and other networks like I2P and Freenet were also in limelight in 2013, and these networks remained anonymous on the internet. The growth of directly connected users to TOR network rose to 5 million in October 2013.

From the above information, we can say it is true that the overall prospective about prevailing threats needs an attention from every users and organizations. The time has come to follow security parameters for both insider and outsider in organizations.