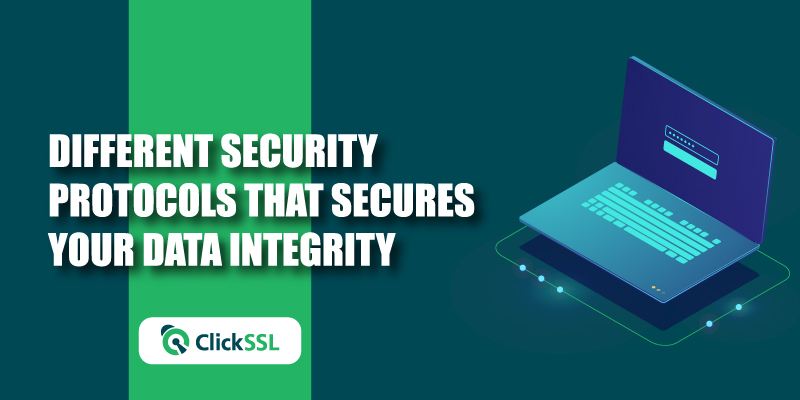 The protocol shows how the algorithm works and gives details like data structure, data representation.

Such protocols ensure the data delivery in a secure way between two ends.

Below we have discussed few security protocols to protect online information.

SSL and TLS are separate protocols; however, TLS is a successor version of SSL. After SSL v3.0, TLS came into focus, and at present, TLS 1.3 is in practice by certificate authorities. Still, we know the TLS protocol with an SSL certificate.

During SSL handshake to create a secure connection, session keys (public and private key) are swapped, and algorithms are agreed upon.

SSL certificate signed by a certificate authority should be compatible with almost all servers, operating systems, browsers to avoid SSL warnings.

However, TLS 1.3 is used by many certificate authorities came into play in 2018. Foremost browser authorities and search engines have already started to use TLS 1.2 and TLS 1.3 from January 2020

VPN (Virtual Private Network) creates a secure and private network while hiding an IP address to cover actual identity. VPN offers an encrypted connection, which is strong compare to a secure Wi-Fi hotspot. While surfing on insecure Wi-Fi, an attacker can steal login credentials and other private information. In that case, you need a VPN that keeps your connection anonymous. VPN offers the freedom to access a website and app in a secure environment using a secure tunnel between a local network and an exit point in another location.

SFTP (Secure File Transfer Protocol) is an upgraded version of FTP (File Transfer Protocol) in which the files were transferred in an unencrypted manner. SFTP removes this issue and offers a secure environment for file transfer on both local and remote servers. SFTP uses a secure SSH protocol to establish a connection. SFTP helps to protect against MiTM and password sniffing attacks. With cryptographic hash function and data encryption, SSH protects data integrity.

SSH (Secure Shell) is a cryptographic protocol for carrying out network services in a secured environment over an insecure network. Over SSH protocol, each command, file transfer, and output are encrypted to protect against network attacks. It connects a client-server application to an SSH server. SSH works on TCP port#22 and generally used on Unix and Windows systems.

Recommended: SSH Vs. SSL- What are the differences and similarities

Open Shortest Path First (OSPF) is a routing protocol that creates a route between the origin and the target router. The IETF (Internet Engineering Task Force) has developed OSPF protocol as an interior gateway protocol. It works on port 89 as a network layer protocol.

Most firewalls can be divided into three categories:

Packet filtering blocks or passes data packets as they pass through a network interface,which include IP-address and port numbers and destination.This type of firewall is the easiest to implement and maintain, and almost no effect on network performance but its protection level is very low.

Filter Circuit level is an intermediate between the packet filter and application layer. Filter circuit-level monitors handshake (handshake) between the authorized client and the external host that determines whether the requested session is valid.Information delivered to a remote computer over a circuit level gateway seems to have originated from the gateway; such it hides the information on protected networks. Such circuit level is inexpensive and suitable for protecting private network. It does not filter individual packets.

IPSec has spread in two main configurations. First configuration carries Network Layer Protocol that uses for data transfer between gateways for local networks that support IPv4 for unencrypted transmission of network. Second configuration is for closing the data within the network, for that all the jobs and the web server must support the protocol IPSec. Today, most modern operating systems (Windows 2000, Linux, and Solaris) protocol supports IPSec.

If we talk about PCT (Private Communication Technology), it works same as SSL. The main difference between PCT and SSL is the message size. PCT has a smaller set of message compared to SSL.PCT supports algorithms RSA, Diffie-Hellman, Fortezza key management; DES, RC2 and RC4 – data encryption; DSA and RSA – for digital signature.PCT is implemented in Microsoft Internet Explorer version 3 and above, as well as Microsoft Internet Information Server version 2 and above. PCT has more options in the negotiation of an algorithm and data formats. While authenticating and encrypting the message, it requires two separate key in PCT. However, in SSL both need a single key.

As you can see

There are emerging risks for online threats and server vulnerability that can damage your network or can steal your data. Either firewall, HTTPS, or IPSec warn about possible violations of security. However, PCT has been replaced by SSLv3 and TLS (Transport Layer Security). Today if we see, SSLv3 is the best security used for server, network, and browser security and many organizations, institutes and corporate have started to adopt SSL technology. Even social media and giant search engines have taken a step in the direction of protecting their business with SSL.