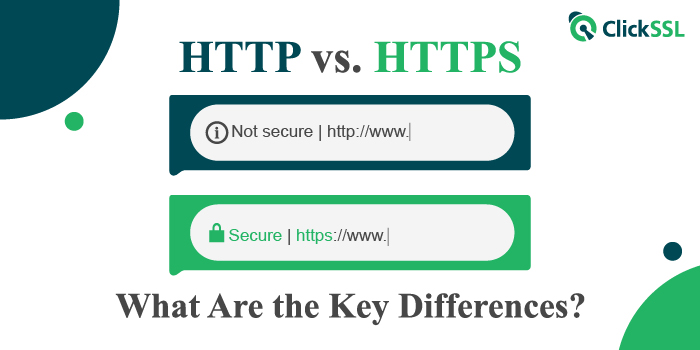 HTTP vs HTTPS – What Is The Key Difference?

HTTP vs HTTPS – HTTP is an insecure protocol where the information remains in plain text while HTTPS keep data encrypted.

If you’re an eCommerce business owner or handle sensitive information on your website, it’s essential to make sure that your site is secure. One of the ways to do this is to switch your website from HTTP to HTTPS (Hypertext Transfer Protocol Secure).

Now, HTTP and HTTPS are the most used protocols for web browsing. However, the former is a less secure protocol. HTTPS is a more modern form of security in which data is secured with SSL/TLS encryption to prevent eavesdropping or tampering by third parties.

HTTP vs HTTPS: What It Is?

This article will help you understand the key differences between HTTP and HTTPS – so you can choose what’s best for your business.

HTTP stands for (Hypertext Transfer Protocol), a set of rules that govern how information is transmitted over the internet. HTTP allows for data exchanges with an HTTP server and can be seen in the form of URLs, search engine requests, and web page content. For example, when shopping online or filling out forms on websites like Facebook, HTTP protocol is used.

HTTP uses port 80 by default, but this can vary depending on the server configuration; it also doesn’t have encryption or other privacy features in place as standard. As a result, HTTP is vulnerable to HTTP Request Hijacking, an attack that man-in-the-middle hackers can use.

What is an HTTP Request?

HTTP Request can be defined as a message sent by a client to a server using the Hypertext Transfer Protocol (HTTP). In practice, it is composed of a message header and an optional body. The HTTP Request may also include entity-specific parameters that are encoded in an ‘application/x-www-form-urlencoded‘ format or as ‘multipart/form-data‘.

To send an HTTP request, a client must open a network connection to the server and send a well-formed message in the request phase. The web server, which is waiting for incoming requests, will then parse this message and decide how it should be processed. In particular, there are two main possibilities:

Common types of HTTP Requests are:

What is an HTTP Response?

HTTP Response is the response that comes back from HTTP servers like HTTP headers and HTTP content. HTTP Responses can be seen in the form of HTTP headers, web page content, or URLs.

The structure of an HTTP request is defined by the Hypertext Transfer Protocol (HTTP) standard. You can use several different methods on your browser for sending requests. The most commonly used methods are POST and GET, but there are also other methods (e.g., PUT, DELETE ).

In this overview, we will focus on POST and GET requests:

There are essentially three parts of an HTTP request: the Request line, Headers, and Entity-body. The first line of an HTTP request is called a Request-Line. It contains several pieces of information about the client’s wish to the server in general terms. The most important part is the method that the client wants to use.

In this example, we have a POST request, which is indicated by the keyword POST. Other methods would be GET or PUT. The other part of the request line is the resource path on which you want to apply that action (e.g., /sample).

The next critical piece in an HTTP request is the headers. These are essentially key-value pairs in which each key has a value. More information about what exactly can be used as a key and what it means if you have, e.g., content-encoding: gzip, will follow in the section about headers.

The last part of an HTTP request is the entity-body, which contains the data that should be sent to a server. In our example, we have proper HTML code for displaying a page, but in general, this can also be binary data (e.g., image or audio/video files).

The headers of an HTTP request contain information about the client’s wish to the server and the state of the communication in general. In our example request, there are three headers specified that are used for fetching a resource from a server:

Several other headers can be used: Host, Connection, Referer, Cookie, and many more. In general, any piece of information (key/value pair) can be sent as an HTTP header.

The entity-body is basically a chain of chunks of data separated by a unique character called CRLF (the carriage return followed by line feed). In our example, we send HTML code to the server that will be interpreted and displayed. But this could also contain binary data such as images or audio/video files.

The following is an example of a complete HTTP request (including the headers) sent to a server:

The data that is being sent to the server is URL encoded in this example (e.g., spaces are replaced by “+”). This is necessary to send binary data, which may contain characters not allowed in a URL (e.g., spaces).

The limitations of HTTP are:

HTTPS is HTTP over HTTP Secure, which means it encrypts data transferred between servers and web browsers. HTTPS essentially does the same thing as HTTP, but it encrypts all data – not just the content of a page or document. This makes HTTPS traffic safer and less vulnerable to spyware or hackers because they won’t be able to see any of your HTTPS content.

How does TLS/SSL encrypt HTTP requests and responses?

The Hypertext Transfer Protocol (HTTP) usually is unencrypted. This means that anyone monitoring network traffic or examining a computer’s network log files can easily see which websites someone has visited, what data they have submitted, etc., as the information appears in clear text. HTTPS is an extension of the HTTP protocol that adds encryption to make this sort of spying impossible if a browser supports it – this way, sensitive information such as passwords are kept safe from prying eyes on the same Local Area Network (LAN).

The Transport Layer Security protocol (TLS) or Secure Sockets Layer (SSL) provides communication security over a computer network where connections may be untrusted and therefore eavesdropped or even actively malicious. In addition to securing communications against eavesdropping and tampering, TLS/SSL can also be used to authenticate parties, such as access control within Internet Protocol Security (IPsec).

As with other protocols based on TLS, such as HTTPS and IMAPS, communication over Hypertext Transfer Protocol (HTTP) can be secured through TLS/SSL to provide confidentiality and integrity of data exchanged between two parties. Data confidentiality using TLS/SSL consists of encryption mechanisms that ensure that only authorized recipients can read information sent over the network.

Data integrity ensures that messages received have not been altered during transmission. Any attacker who can access a computer connected to a network could theoretically intercept any communications transmitted in clear text without being detected by either party. A well-secured HTTPS site displays a padlock sign to assure security. Unlike HTTP, which uses port 80 for data communication, HTTPS relies on port 443.

The process for how TLS works can be divided into four phases which are explained below. Note that not all of these phases are necessary for each type of application using TLS.

What are the Advantages of HTTPS?

Difference between HTTP vs HTTPS?

Switching from HTTP to HTTPS: What to do

To switch your website from HTTP to HTTPS, there are two main methods:

Option 1: Redirecting HTTP to HTTPS using .htaccess, which occurs at the domain level.

Here, you will need to add redirects from HTTP to HTTP in your website’s .htaccess file – this will also include any webpages within it. The second option you have is to use a tool like Google Webmaster Tools and add 301 Redirect HTTP to HTTPS (found under Search Console > HTTP Status Codes)

Once you’ve completed this process, all HTTP requests to your website will be redirected to the secure version with a 301 HTTP response. And vice versa: if someone tries going to an HTTP URL on your site, it’ll automatically redirect them over to the SSL-secured protocol instead of giving them that HTTP “not found” error.

– Before making the switch, you should know these things:

Summary for HTTP vs HTTPS

You can switch your website from HTTP to HTTPS anytime. It is an excellent way of making sure that the data transmitted between the user and the server are encrypted. You also can use encryption certificates which will help authenticate web servers for them to be trusted by browsers.