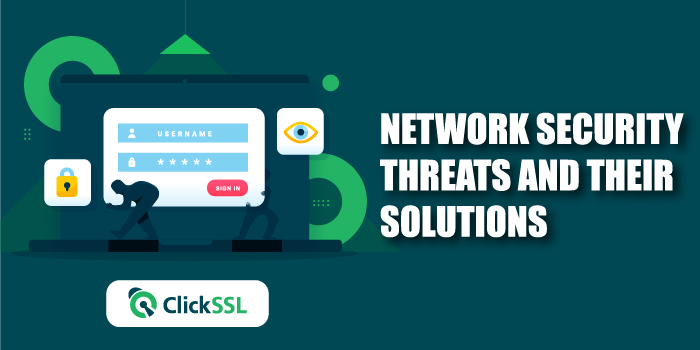 12 Network Security Threats And Their Solutions

Security plays a very critical factor in almost every field either it is an organization, a governmental entity, a country, or even your house. Computers, mobile devices, and Internet are also facing a surplus amount of security challenges day by day.

Computers/mobiles are now included in the list of the basic necessities of a human being. From simple mathematical calculation to storing data, building applications, communicating with the world and so on we all depend completely on these devices.

As far as the security risks in mobiles/computers are concerned, virus attacks, stealing of data, deletion of data and damage to hardware can be taken into consideration.

What is a Network?

The computers connected through intranet together in an order to serve a number of users in a particular area like in an office can be termed as a Network.

What is Network Security?

Network security deals with aspects like prevention of unauthorized access, termination of misuse and denial of the service problems. Security may be referred to as complementing factors like: confidentiality, integrity and availability (CIA). If you are thinking that this is it, you are absolutely wrong.

Following are the types of threats against which a network is vulnerable to:

How can one generate such an attack?

It is very simple; just keep sending more and more requests to the system than that it can handle all along. With the invention of the toolkit, it has become way easy to disturb any website’s availability. In DOS an attacker’s program will establish a connection on a service port, obviously counterfeiting the packet’s header details and then leaves the connection. Now if the host can handle 20 requests per second and the attacker is sending 50 requests per second, then it may cause the host server down due to mass fake requests. In this case, the server cannot accept the legitimate requests as well due to fake requests and it shows the unavailability of the server to a legitimate user.

This is the most harmful threat as it leads to the loss of significant information and also to further attacks which could be worse than this. An attacker unknowingly gains access to your authorized section and steals sensitive resources. Suppose a host also playing the role of a web server has to provide web pages as per the request. But the host should not allow anybody to access the command shell without being sure about the identity of the user.

Another greatest security threat in the network. During eavesdropping, an intruder intercepts the packages of data transferred over HTTP (through monitoring software), modifies the data and misuses them in order to harm the network. It is really a dangerous threat as there are many tools named as Sniffers available and developed frequently to intercept the data packages.

IP spoofing means presuming the IP of a network, creating an illusion of being a valid IP by creating Internet Protocol packets with disguised intentions of harming the actual owner of the IP address.

By forging the headers in order to insert fallacious information in the e-mail headers to mislead the receiver from the original destination is also a type of spoofing which is known as Spamming.

A brute Force attack is performed to guess the maximum combination of passwords. It is researched that 5% of attacks are responsible for Brute Force attack. An attacker does not interfere in the user’s task but works on each keystroke a user types and guess the combination of username and passwords. The attacker checks all passphrases and passwords until a correct match is not found.

Cheap SSL Certificates from $10.00/yr.!
Get the lowest prices on trusted SSL Brands from ClickSSL.

DNS Query attack refers to a manipulated act in which an attacker finds a DNS vulnerability (Domain Name System) and takes advantage of it. Attackers sniff a plain text communication between the client and DNS servers. DNS converts the domain name into an IP address. The zero-Day attack, Denial of Service, DDoS attack, DNS amplification, Fast-Flux DNS are few types of DNS Query attack. In few cases, attackers steal login credentials of the DNS provider’s website and use them to redirect DNS records.

Ping is a utility that confirms whether the host is alive (active) or dead (shut down). The host can be a computer, system, website, printer, or network. Ping sweep attack refers to collect the information by finding alive hosts, which uses Internet Control Message Protocol (ICMP) or two-way handshake protocol. Ping sweep attack includes two-way communication like sending data from a single host and validates the data by another host along with acknowledgment. The acknowledgment shows either a ping was sure-fire or not.

ICMP functionality should be disabled about a specific router or any device. Disable the send and receive ability of ICMP includes request processing and Echo reply. Consequently, the device will not accept any ping request.

A reconnaissance attack is a piece of collecting information through physical reconnaissance, network examining, social engineering. Ping sweep, phishing, packet sniffing are few examples of Reconnaissance attacks. Attackers keenly observe social media profiles and find loopholes in the network, applications, and services and search the area to take advantage of them.

These were some of the vulnerabilities prevailing in network security. Other prevalent vulnerabilities consist of data loss, data modification, sniffer attack, application-layer attack, password-based attacks and so on.

Security stands as the toughest challenge as it gets more and more vulnerable to attacks day by day.

As far as the network security is concerned, paying attention to some of the aspects will help to achieve proper secure environment such as:

Keeping in mind the needs as well as the threats against which your network is vulnerable to, you should use the best security mechanism to protect your organization.