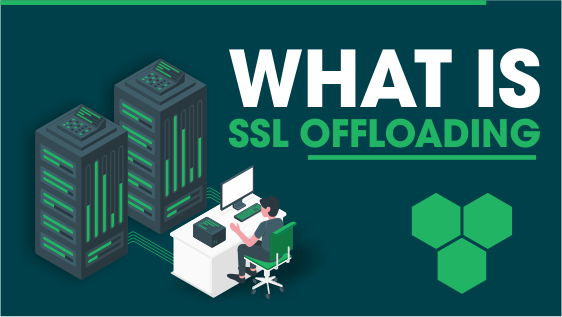 If you are a regular internet surfer, you must have noticed that some sites get slower when many users visit the same. For example, when there is a popular football match, or entertainment sites when an episode of a popular serial is aired, etc. Another reason for the slowing down of servers is SSL certificates responsible for the website’s security. You cannot remove them, but you can accelerate the speed of your server using SSL offloading.

What is SSL Offloading?

An SSL offloading is the mechanism of transferring the incoming encrypted traffic from a client to a load balancer to relieve the webserver from encryption/decryption of data. A load balancer is positioned between a browser and the webserver. They use SSL security protocol to perform either SSL termination or SSL bridging to lower the server’s metaphoric shoulders’ operational.

The load balancer receives the encrypted data coming from a. It performs decryption and sends the plain text to the server, making it free from this time-consuming process.

Here is the list of famous SSL load balancer providers:

How is a Regular SSL connection Made Without SSL Offloading?

At this stage, you have made an impression of SSL offloading in your mind. You might be wondering why SSL offloading is needed. To understand that, you must know how a systematic SSL connection works:

As you already know, a public key and a private key are used to encrypt and decrypt. These keys are of larger size (2048-bit) with the RSA algorithm. Although it safeguards the site completely, it makes the encryption and decryption process slow due to its bulky size.

A session key is faster than 2048-bit keys, but when many visitors land on the same website, the server has to deal with many session keys. This burdens the server with encryption or decryption requests in a short interval of time.

This activity is CPU-intensive and consumes the resources of the web server up to a large extent. This process makes the server work slowly. the SSL offloading concept was introduced to make the backend work faster.

How Does SSL Offloading Work?

Let us find out the working, pros, and cons of both methods separately:

SSL bridging is another method of SSL offloading. It is not appropriate for the websites that use sensitive information of the clients’ such as usernames, passwords, or banking details, etc., to use the SSL termination technique. Handling a large quantity of HTTPS data from the users makes these web servers work slower. For this purpose, SSL bridging is used by these websites. Like SSL termination, a load balancer is used in this technique too. But the way of working is different, which is explained ahead:

1. The main advantage of SSL bridging is that data security is not compromised. The information stays encrypted in the whole process.

2. It protects the server from the following web-application attacks:

SSL offloading makes your server work fast without latency. This can go a long way in helping you get a leg up on your competitors. As if your site takes time in loading, then the visitor will surely leave your website and will go to the next one.

So, by using the SSL offloading technique, you can achieve success in your online business. After reading the pros and cons of both techniques’ you must have got an idea which technique you should use for your website as a single load balancer can perform only one task at a time, either SSL termination or SSL bridging.

It would help if you chose the load balancer providers wisely as you have to share your web server’s private key with them.