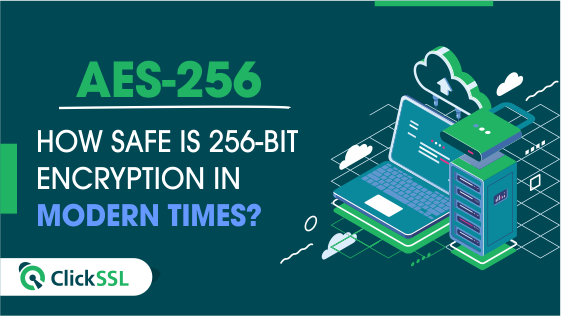 When you decide to use encryption for the security of data in your enterprise, one of the first choices that you face is that of encryption strength. There are many options available, with the most popular ones being 128-bit, 192-bit and 256-bit encryption. Of course, the safest among them is 256-bit encryption, but sometimes we wonder just how secure it is for the safety of our data. If this question has been going on in your mind too, we’re going to answer it here. Let’s begin with a brief introduction to encryption.

Cheap SSL Certificates at $8.00/yr.!
Get the lowest prices on trusted SSL Brands from ClickSSL.

What is 256 Bit Encryption?

This is the safest digital security solution and hence all the modern algorithms, AES, as well as SSL (Secure Socket Layers), certificates use 256-bit encryption.

The main charm of this encryption is that any intruder who does not possess a decryption key but wants to decrypt the data secured by this encryption needs to try 256 varied combinations to break the cipher code.

It’s almost impossible to break through 256-bit encryption without the possession of the secret key. Decrypting the same by implementing the trial-error method would take millions of years even for computers to find the right combination.

This extremely secure security protocol is used by governments, banks, financial institutions, secret agencies, the military, and other companies. All of them prefer to use AES 256-bit encryption for securing their digital information.

An Introduction to Encryption

Before we go into the subject of 256-bit encryption and its safety, it’ll be a good idea to take a look on what encryption basically is and how it works. So, the idea behind encryption is to randomize the information/data that would otherwise be in plain text, so no one can make sense of it even if it’s stolen. This is achieved by running the data along with a secret string of letters through an algorithm, a process usually known as hashing. Here is an example of what simple data in plain text looks like after hashing:

The secret string of letters used in the hashing process is known as a Key. Since encryption is done through a logical process, the data that was encrypted with help of the key can also be decrypted and recovered back into plain text form with its help (except in the case of Public Key encryption, which is a bit more complicated). That’s why the strength of the encryption depends on the length of this Key. The longer the key, the more time it’ll take to decrypt the data through guesswork-based attacks (i.e. brute force attacks) because the attacker will have to try out a large number of combinations.

There are three main types of encryptions. They are:

DES Encryption uses a 64-bit encryption algorithm for data encryption. But 8 bits out of 64 bits are utilized in examining cipher errors in the data. So ideally, DES uses 56-bit encryption only which makes it risky to protect sensitive data.

Though DES encryption has lost its place in the market of digital securities, it played a major role in the advancement of cryptographic algorithms.

AES Encryption uses symmetric key encryption and encrypts blocks of 128-bit, 192-bit, and 256-bit sizes. AES is used in hardware and software all around the globe to encrypt confidential data. It is the best for electronic data protection and is widely used by governments and other financial institutions.

Amongst all the above-stated types of encryption, AES 256-bit encryption is widely used and is the most trusted type of encryption. The United States Government, security agencies, secret services, and a majority of companies around the globe use AES for securing their data communications.

We just explained the role of longer keys in the strength of encryption. This length of keys is measured in bits, and it continues to increase along with the increase in computing power so that brute force attacks can’t be carried out successfully through a computer powerful enough to break the encryption. We started with 56-bit keys in the 1970s, which could have 2^56 possible unique combinations. As computing power increased, we shifted to Advanced Encryption Standard in 2001, which allows 128-bit, 192-bit and 256-bit keys for encryption.

Today keys of all these 3 lengths are used for the purpose of encryption depending on the sensitivity of the data being protected. For example, a simple MS Word document is protected with 128-bit encryption; 192-bit encryption is used on websites to protect user data, and 256-bit is used by the banking industry to protect credit and debit card data.

Recommended: What is bit encryption, and how does it work?

How safe is 256 Bit Encryption?

As of now, it’s the safest encryption standard available on the planet, as it can have 2^256 unique combinations. If you’re not good at maths, here’s how many numbers they’re in plain English:

The answer is 78-digits. That’s how many possible key combinations can exist in AES-256. More numbers than a modern scientific calculator can calculate. If a computer tries breaking AES 256 via brute force that is the number of unique combinations it needs to try in order to be successful. 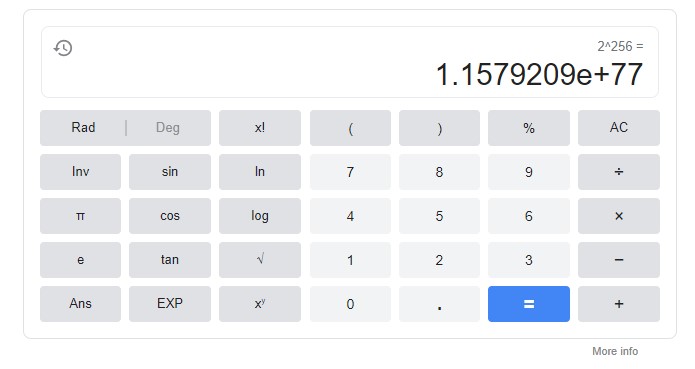 256-bit encryption is so strong that it’s also resistant to attacks from a Supercomputer. In case you don’t know about them, supercomputers are computers that can break down huge tasks into multiple smaller chunks and work on them simultaneously with large number of processing cores that they have. It’s virtually impossible to break AES-256 through brute force attacks, no matter how powerful the computer(s) involved in the process. At present Tianhe-2 (also known as MilkyWay-2) is the most powerful supercomputer in the world, and even that computer would need millions of years to break AES 256 through a brute-force attack. Any attacker would be foolish to even think about attempting something like that.

As stated above, AES is symmetric key encryption. In symmetric encryption, only one single key is used in the entire encryption-decryption process.

Both the sender of the data as well as the receiver of the data use the same key named the session key. The key length which is 256-bits makes this key the largest non-penetrable weapon for hackers and other brute-force attackers.

The Public Key – encrypts all the data

The Private Key – decrypts all the data encrypted by the public key.

There are varied uses of this industry-standard 256-bit encryption. They are:

256-bit encryption is considered to be the most secure and trustworthy encryption in recent times. It not only ensures data confidentiality but also offers data integrity and data authentication.

Your data is completely secured with 256- bit encryption and hence it’s the most desirable security solution in the digital market.

Such is the power of this encryption security.

The data being protected today with 256-bit Encryption

You can also get an idea of how secure this encryption standard is by the fact that even the US government and its various agencies use only 256-bit encryption to protect their top secrets. All credit card companies, banks and other financial institutions use it to protect the financial data of their customers. It’s used by armed forces around the world to protect their data, which is why it’s also known as Military-grade encryption.

Some of you may also be wondering about the future of 256-bit encryption. You may be thinking it is fine that 256-bit encryption is best-in-class today, but will it remain as in the future as computing power increases? Well, the answer is yes. It will remain unbreakable for future years at least. The change in algorithm happens due to rising computing power and its mechanism. The CA/B forum always recommends upgrading encryption strength due to the changing technological environment.

So that was our explanation of how secure is 256-bit AES encryption. The bottom line is that it’s the most secure encryption method that you can use today, and it’ll remain so in the foreseeable future. You can start using it for the security of sensitive data in your enterprise. If you still have any questions in your mind, share them in the comments below and we’ll try our best to answer them.