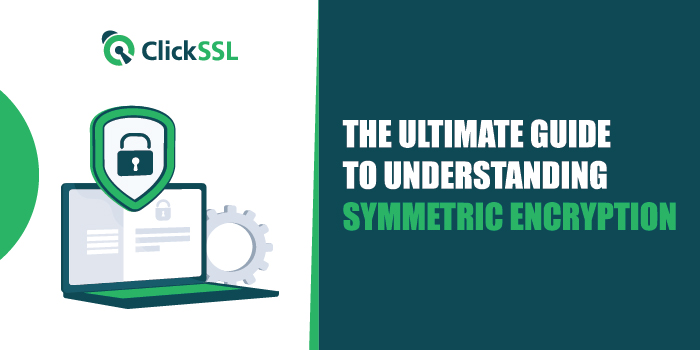 What is Symmetric Encryption? Symmetric-Key Algorithms

In this article, we will be talking about everything that you need to know about symmetric encryption.

What Is Symmetric Encryption?

Symmetric encryption, also called symmetric-key cryptography, can be described as a process or technique where a secret key is used for decryption and encryption functions. Data will be converted to a format during symmetric encryption to prevent unauthorized users from inspecting or reading it.

In other words, symmetric encryption can be defined as a type of encryption, which uses the same key to decrypt and encrypt data. Here is a quick overview of how the process of encryption generally works.

How Does Symmetric Encryption Work?

In the second stage of the process, the encrypted message, called a ciphertext, will look like a bunch of scrambled letters, which means that no one will be able to access or read them. Finally, the message recipient will use a decryption key for transforming the encrypted message into its original form.

Having just a single key for both decryption and encryption functions will simplify the process of encryption. This is because you are applying just one key to transform the plaintext into an unreadable ciphertext.

One of the major advantages you can enjoy by choosing symmetric encryption is that it ensures data confidentiality and privacy without using multiple keys. Therefore, symmetric key encryption is beneficial when it comes to encrypting files and databases.

What is Symmetric Encryption Used For?

Most of you would have probably heard about PCI DSS. The PCI DSS or Payment Card Industry Data Security Standard can be defined as a set of twelve requirements that businesses accepting credit card payments will have to adhere to.

Do you know that one of the integral components of PCI DSS compliance is symmetric encryption? It comes under the third requirement that primarily focuses on offering adequate protection to the data of cardholders or customers.

Data at rest refers to the current state of your business data when it is sitting on a device or server. In other words, data at rest means that the data will not be in transit, which implies that the data is not being sent across the internet or a network.

Most businesses will have large volumes of confidential and important business data, which they don’t want unauthorized people to access or read. If you want to prevent unauthorized individuals from gaining access to such data, you must use the at-rest data encryption method.

The Role Of Symmetric Key Encryption In Website Security

Symmetric encryption is a crucial part of the PKI ( Public Key Infrastructure) ecosystem. This, in turn, allows secure communication across the internet by transforming readable data into unrecognizable text.

Most of you would have probably noticed a padlock in the URL bar of your internet browser when visiting websites. The appearance of a grey padlock indicates that an SSL or TLS certificate has been installed on the website, which means that you are using an encrypted and safe connection to send and receive data.

This also indicates that your internet browser has gone through the below-mentioned processes.

HTTPS works by making use of an asymmetric encryption method for initially authenticating the server of a website. The same type of encryption is also used to exchange the symmetric session keys, which is a crucial part of a TLS handshake process.

After the processes mentioned above are completed, symmetric encryption is used for the data encryption process, which will take place during a website browsing session. The TLS handshake does the following things.

The Key Should Remain Secret For Symmetric Algorithm To Work

You would have probably guessed by now that the key should remain secret for the process of symmetric encryption to work. This means that only you and the recipient should know the key.

However, if that’s not the case, and if someone else knows it, they will decrypt the data and access it easily.

When that happens, the encryption process will remain pointless, so it is important to keep the key secret. It is best not to store private or secret keys in internet-facing environments to prevent unauthorized individuals from accessing the data.

The best thing you can do is hide private or secret keys, where no one will be able to steal, access, or find them. In other words, you will need to do everything to ensure that the keys will not end up in the hands of unauthorized individuals.

How to Share a Key Securely to Facilitate Symmetric Encryption

Let us assume that you need to share some urgent but secret message to someone living in a different country, but they do not have access to a key for decrypting the messages. If that’s the case, you will need to get a shared key for the receiver so that they can decrypt it.

This implies that you will need to share the secret key through the internet, which is not secure. This is because your internet connection will be getting bounced through several touchpoints during its journey.

The issue with this is that your government, cybercriminals, or someone else might intercept the key and decrypt the message without any hassles. This is commonly known as MitM or man-in-the-middle attack. This means that sharing keys across the web is not a good idea. Due to this, we will need to implement alternative methods such as Diffie-Hellman or RSA.

Symmetric algorithms can be divided into two separate categories, and they are called block and stream ciphers. Block ciphers serve to encrypt data in blocks or chunks, while stream ciphers encrypt data one at a time. Here are some of the most common types of Symmetric-key algorithms.

Data encryption standard is a form of block cipher, which encrypts data in 64-bit chunks or blocks by using just one key that comes in three different sizes ( 192-bit, 128-bit, and 64-bit keys). However, it is important to note that one bit among every 8 bits will be a parity bit. 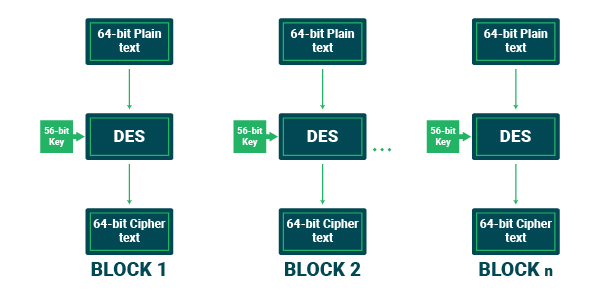 Data encryption standard is one of the earliest symmetric encryption algorithms, but they are no longer suitable for use. This is because DES is viewed by many as an insecure method, which has become deprecated.

What makes TDEA or 3DES different from DES is that it uses either 2 or 3 keys, which in turn enables this symmetric algorithm to perform multiple rounds of encryption. As a result, Triple Data Encryption Standard is a lot more secure when compared to DES, but it is not as secure as the Advanced Encryption Standard. 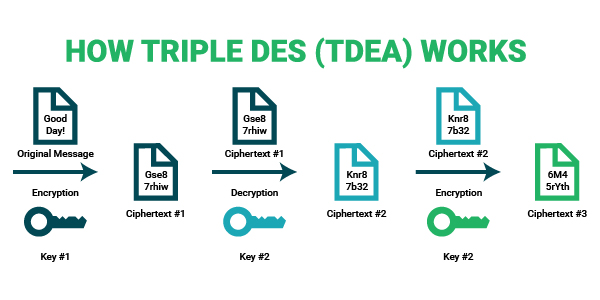 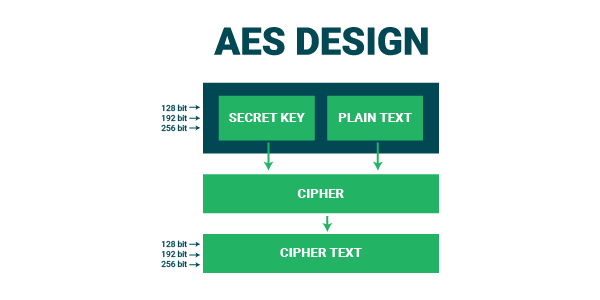 However, it is important to note that AES works differently compared to both the methods mentioned above. This is because AES is not based on the Feistel Cipher; instead, it is based on a substitution permutation network.

As mentioned earlier, symmetric encryption is a very old encryption method, but it is still widely used due to the higher security and safety it guarantees. If you want to ensure that data sent across the web is safe and can’t be accessed by unauthorized users, then symmetric encryption will help you do that with ease.