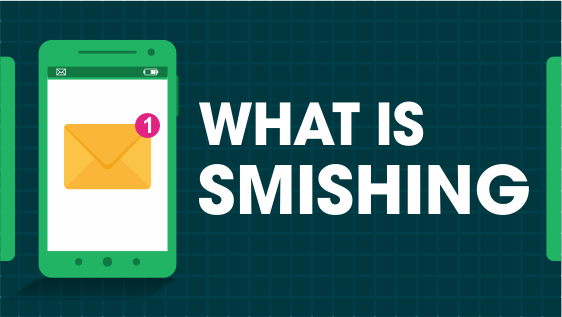 What Is Smishing? Everything You Need to Know

The rate of smartphone usages has increased. According to a research report released by GSMA Intelligence, there exist over 5.15 billion phone users across the globe. This trend in phone usages has spiked a new wave of cyber vulnerabilities. Cybercriminals have taken the movement to their advantage and for their malicious benefits. One common cyber threat that has cropped up and one that is extremely alarming is the smishing attack threat. This article sheds some light on what exactly smishing is, examples of smishing attacks and how you can stay safe from it.

Smishing is a type of phishing attack that takes place via Short Message Service (SMS). In a smishing attack, a cybercriminal will disguise himself as a legitimate person and try to lure a victim into giving out his/her personal information via text messages. A smishing attacker often uses the elements of social engineering to get the data from victims.

How a smishing attack works

A smishing attack does not take much. All a hacker needs are to set up a specific target and have some technologies at hand. Smishing attacks will usually involve the use of social engineering attacks. Let us now look at how a smishing attack works.

The cyber attacker will find a target and then send a text message to the target via a spoofed number. Usually, the number and the message that the text carries will look so much legitimate to the extent of luring the victim into believing that the message and the sender are real. Smishing attackers will even go to the point of researching their targets so that they have adequate knowledge about their targets. They will pretend to be a company or a financial institution. Their targets will find it easy to believe them.

The victim will then receive the message on their phone. The message will usually have an attractive offer or a worrisome message that will prompt the victim into taking some action.

What the victim does after receiving and reading the message is extremely critical. Suspicious users who disagree with the text message are the ones that stay safe. Those that fall into the trap and go ahead to click the link provided in the text message join the list of the many smishing victims globally. They will be prompted to give out their personal and very vital information or will be lured into downloading malicious software that will cause harm to their system.

The personal information that you could lose because of a smishing attack includes essential credit card and debit card details, personal health details, work information, login credentials, among others. The software that the message will lure you into downloading can also cause serious harm to your device. The attacker will have control over your device; they will use the software to spy on your activities, steal your details, or access your accounts.

Cyber attackers can use different forms of tricks to carry out smishing attacks. Here are some of the examples that show that the message you are receiving could be a smishing attempt include:

How to protect yourself against smishing attacks

Safety from smishing attacks is usually a personal initiative. It all starts with what you do when you receive a text message from an unknown source. The best measure will be first to verify the source. If you are suspicious about the source of the sender, then it is wise if you do not open the message. If, on the other hand, you have a reason to believe that the sender can be trusted, then you can go ahead to open the text message.

Smishing attackers will usually attach harmful links to text messages. These links can be a threat to your mobile device and your personal information. Once you come across a text message with a link that you are suspicious about, the best approach will be to avoid opening the link unless you can verify its authenticity. For instance, if the message is related to your bank, you can directly call the bank or visit its website to verify the authenticity of the message.

3. Never allow a text message to lure you into providing your personal details

This one is obvious, but it also calls for emphasis since humans are good at ignoring and will keep on making the same mistakes. Never at any point in time should you give out your sensitive details via a text message. Talking of sensitive information, I mean things like your health records, financial disclosures, debit card details, credit card details, and login credentials, among others. Suppose you must supply some confidential information, and you are directed to a website. In that case, you should visit the web first and try to verify the legitimacy of the website by looking at trust signals.

4. Use the block or SMS filter feature

A block or filter feature can automatically find smishing messages. This feature will help you find a possible smishing attempt and help you block the sender from sending the messages to you. You should always enable this feature on your phone if you want to be safe. You should also report phishing attempts to relevant authorities such as the Federal Communications Commission (FCC), and the FBI’s Internet Crime Complaint Centre (IC3) to help in the war against smishing attacks.

With the increased usage of phones, hackers are now having an easy time carrying out their malicious activities. One form of cyber threat that is affecting people around the globe is smishing attacks. Smishing attacks are where hackers try to lure the victims into their trap using text messages. There are dire consequences that await you when you fall victim to the attack. You will lose your vital information and tarnish your image. The best immunity towards smishing is understanding the whole concept of smishing, the examples of smishing attacks that you are vulnerable to and the measures that you can put in place to protect yourself from such attacks. This article has cleared the air on all these concepts.